IMC HELD A ROUNDTABLE WITH ON TOPIC DIGITALIZATION IN KOSOVO 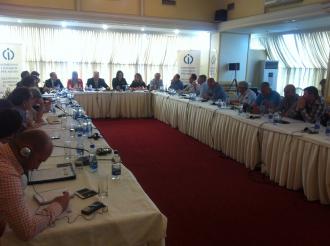 Independent Media Commission (IMC) held a roundtable on the topic Digitalization in Kosovo. Roundtable was chaired and moderated by the President of IMC, Mr. Adnan MEROVCI. In this roundtable were present all members of the IMC as well as Chief Executive with the Directors of Executive Office of IMC.

The purpose of the roundtable was that at this stage when IMC is finalizing the strategy for the digitalization of terrestrial broadcasting in Kosovo, to give opportunity to all stakeholders to express their views, interests and their proposals to digitalization.

Participants were representatives of all national and local televisions, Program Service Providers (PRB), Ministry of Economic Development, the Association of Independent Electronic Media (AMPEK) Regulatory Authority for Electronic and Postal Communications (ARKEP), the European Commission, the OSCE mission in Kosovo and the Council of Europe.

At his opening presentation, the President of IMC, Mr. MEROVCI informed the participants that IMC at the end of June 2014, according to the Law will put at public discussion the Strategy for digitalization, where stakeholders will have the opportunity once again, before this Strategy is sent to the government, to make their comments, as to what defines The Strategy of switchover from analogue to digital broadcasting in the Republic of Kosovo. He put a special emphasis regarding the deadline set to end digitalization process in June 2015.

Also the President of IMC articulated the 5 attributes of IMC mission, which in the function of implementing the Law on IMC, is related to the process of Digitalization Strategy as follows:
After the opening presentation by the President of IMC, speech was followed by representative of the Ministry for Economic Development, Mrs. Marcelë RESTELICA, who spoke on the Draft Law on Digitalization and stages of development.

In addition, the Chairperson of the roundtable gave the word to each participants who expressed their views, comments, ideas, assessments, critics and their interests in relation to Digitalization.

After the words of each participant, Chairperson along with participants requested the enacting of common conclusions from this roundtable, which were: