Joint statement on elimination of sexism in the media is signed 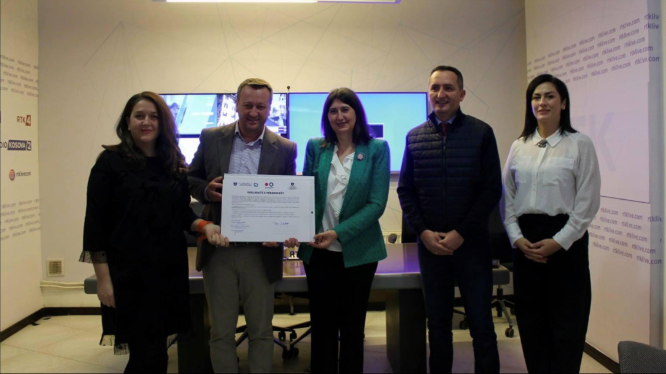 As part of the 16 Days of Activism against Violence against Women, today on the International Human Rights Day, the Independent Media Commission (IMC) in cooperation with the Kosovo Centre for Gender Studies (KCGS) and the Agency for Gender Equality (AGE) signed a Joint Statement with Radio Television of Kosovo (RTK).

This joint statement initiated by the Kosovo Centre for Gender Studies, in cooperation with the Independent Media Commission and the Agency for Gender Equality, was drafted with the aim of advancing gender equality in Kosovo with the media as agents of socio-cultural changes.

Through this statement, in accordance with the obligations arising from the Code of Ethics for Audio-visual Media Services, as well as the basic principles of non-discrimination and gender equality protected and promoted by the Constitution of the Republic of Kosovo, CEDAW, Istanbul Convention and other applicable laws, the signatory media of this statement pledge to:

- Respect the Code of Journalistic Ethics and strictly adhere to the rules of fair, accurate and impartial reporting in the context of gender equality;

- Work to eliminate sexism and hate speech in the media;

- Respect, promote and incorporate the principles of gender equality and non-discrimination in existing domestic policies;

- To increase the capacities of journalists, for gender sensitive reporting of cases of violence against women and domestic violence.

The signing of this statement is entirely voluntary, respecting the freedom of expression and the independence of the media.

This statement is also supported by the Acting President of the Republic of Kosovo and Chairman of the Assembly, Mrs. Vjosa Osmani who addressed the media with the call to become a signatory to the declaration, in order to promote gender equality in Kosovo.

The statement is open for signature and is forwarded to all media, which voluntarily assume the commitments arising from this statement. The statement can be foundhere.