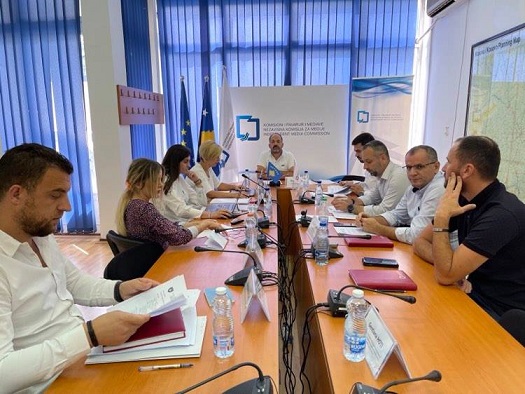 The Independent Media Commission (IMC), on July 29, 2021, under the chairmanship of the Chairman of the IMC, Mr. Xhevat Latifi, has held the ninth regular meeting for this year. Initially the Committee approved the agenda of the meeting and then the minutes from the last meeting.

In this meeting according to the agenda, IMC has reviewed legal cases related to the violation of Law no. 04 / L-44 on the Independent Media Commission, respectively Article 28, paragraph 1, which stipulates that:

"Licensed audiovisual media services must submit an annual report to the IMC, which includes information regarding the program and action in accordance with the terms of the license along with a detailed financial report and other information provided by law." .

So the media service provider, according to Article 28 of the IMC Law is obliged to submit the annual report to the IMC, regarding the program and action in accordance with the license conditions together with a detailed financial report and other information. .

The Independent Media Commission has found that even after the expiration of the deadline set out in Article 28 of the IMC Law, the Audiovisual Media Service Providers (OSHMA) listed below, have failed to act in accordance with the IMC Law , by not submitting the annual report for 2020. The Commission has reviewed all these cases of legal violations and after reviewing it has concluded that in all these cases the entities have been found in violation of the legislation.

After reviewing the legal cases of violations, the Commission decided that the following media outlets are sanctioned with the measure Reprimand.

The IMC Commission has reviewed all these cases of legal violations and has concluded that these CSOs have been found in violation of legislation, therefore the Commission decided that these CSOs should be sanctioned with a sanctioning measure with a fine, in the amount of one thousand (1000) euros. , in accordance with Article 30, paragraph 1.3, of the IMC Law.

The cases reviewed concerned requests for additional radio frequencies, requests for termination of the distribution operator's license, and requests for change of ownership. The reviewed licensing cases are listed as follows:

- Eagle - Decision for termination of the Distribution Operator license;

- Connect ISP - Decision for termination of the license of the distribution operator; AND

In this meeting, the Commission discussed the decision of the IMC to suspend regulation no. IMC-2017 / 02ka, taking into account the fact that after the initiation of the procedure for amending the Regulation, issues have been observed which require longer time for evaluation and that the procedures for amending this Regulation and reviewing the licensing criteria require relatively long time. during and in consultation with the practices of other countries, the Commission decided that the suspension of the issuance of licenses should be terminated, so that eventual licensing applications are handled and potential candidates are provided with broadcasting licenses until the entry into force of the new Regulation. While the decision to initiate the procedure for amending and supplementing the Regulation on Audio and Audiovisual Media Service Providers IMC-2017/02 remains in force.