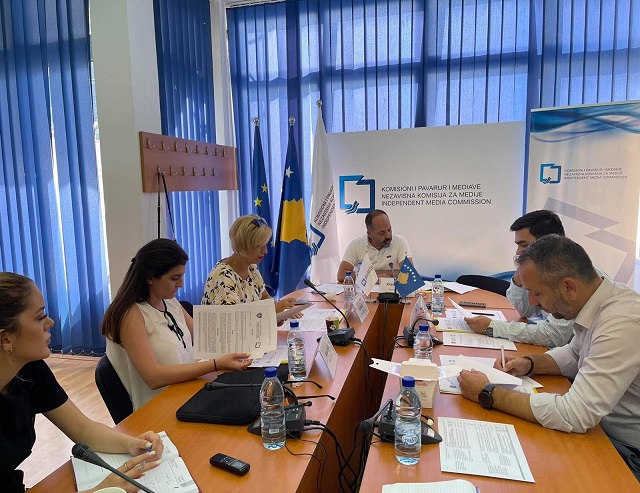 The Independent Media Commission (IMC), on August 17, 2021, under the chairmanship of the Chairman of the IMC, Mr. Xhevat LATIFI, held its tenth regular meeting for this year. Initially the Committee approved the agenda of the meeting and then the minutes from the last meeting.

In this meeting according to the agenda, the IMC has reviewed the legal cases related to violations identified by the monitoring of Audiovisual Media Service Providers (OSHMA) during the monitoring conducted by the IMC from 22 to 28 May 2021.

According to the findings of the monitoring process, the IMC has initiated several legal cases which relate to violations of the above mentioned IMC legislation for the following media: RTV21, TV Dukagjini, Klan Kosova and Kanal10.

After reviewing the legal cases of violations, the Commission decided as follows:

To oblige the above-mentioned CSOs to, within ten (10) days, categorize the films and series they broadcast, warn them before starting with a verbal and acoustic signal and identify them with the appropriate visual symbol during their entire duration according to the categorization of programs defined by Regulation IMC-2013/01.

To oblige the above-mentioned CSOs that, based on Article 3 paragraph 5 of Regulation IMC-2013/01, to issue a Practice Code which will set self-regulatory standards for the transmission of programs that may have a detrimental effect on children and minors, and bring this approved Code to the IMC within thirty (30) days;

To sanction the above-mentioned media outlets with the sanctioning measure Notes, in accordance with Article 30, paragraph 1 of the IMC Law, for the identified violations.