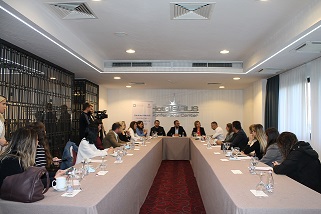 On the occasion of the Global Week for Media Education and Information, this week marked every year by UNESCO, the Independent Media Commission (IMC) in cooperation with the Department of Journalism at the University of Prishtina, organized a roundtable discussion on "Media Education / Inappropriate content for children "

The purpose of the roundtable was that in the framework of the Global Week for EMI, actors could present their views on media education and discuss the progress made in this area. The participants in the discussion panel presented to the audience in the main points their views on media education, followed by an interactive discussion by the participants and questions and answers for the panel.

From all that was discussed by the participants in the meeting, they generally agreed that it has not yet been achieved to form an approach of joint organization between responsible institutions and bodies such as: regulator, media, schools, parents' councils and other public institutions such as and NGOs whose field of activity is the protection of children's rights. Therefore, it has not yet been achieved to draft a national policy on media education which would address the challenges of adequate legal regulation, namely the amendment and drafting of legislation in addition to rapid technological changes.

At the end of the discussions of this roundtable, the participants drew some conclusions regarding the protection of children from inappropriate media content:

• Initiate a general awareness campaign for child protection in the media;

• Planning and initiating an information campaign for parents regarding children's rights and their protection in the media;

• Realization of the request that the subject of "Media Education" be included as a compulsory subject in the school curriculum;

• Public Television (RTK) should provide more program space with content about media education in the children's section, with a special focus on protecting children from harmful program content;

• The Ministry of Education, Science, Technology and Innovation as well as the Municipal Directorates of Education should be active in organizing workshops, seminars, trainings for child protection in the media.